Life expectancy would grow by leaps and bounds if green vegetables smelled as good as bacon. – Doug Larson

My last post was for a bread to sop up chowder or soup broth. I would be entirely remiss if I didn’t supply you with a recipe to use it. So here it is. And it’s one of my best.

Childhood memories will flood your mind when you lean over the pot and inhale…deeply. And believe me, you will do that. This recipe is “the melting pot of homey memories.”

Corn was just about at its peak in Nova Scotia when I made this in September. This recipe uses three ears. Fresh corn in chowder is always the way to go, not creamed corn. Creamed corn is gross.

Does anyone actually seek out cans of creamed corn to eat? Would you admit to it? I find it too “gloopy.”

Now, whole canned kernels are an entirely different matter. They’re almost as good as fresh. And they’re relatively inexpensive, too. So since it’s January, head to the canned veggie aisle of the grocery.

Add bacon (3/4 of a pound!) and some onion and you’re half way there. Is there any way this couldn’t be good?

The real way to thicken a chowder—or chowdah if you’re from New England like some of my relatives—is with potato. The potato is cooked until it starts to disintegrate a little into the water. The starch and potato thickens the liquid and gives it that mouthful body we all love so much.

My chowders are finished off with evaporated milk. For some reason it seems to work better, and taste better, than regular milk or cream. It adds a richness that just isn’t there without it.

This recipe is easy, easy, easy. On a scale of 1 to 10 (with 10 being high) it’s got to be 2. If you can peel, dice and slice you can make an excellent, comforting chowder. It's perfect for those rainy, miserable days when you need a warm hug from the kitchen.

Knowing how to make corn chowder is a kitchen necessity. It’s one of those basics you assume everyone knows how to make. But that’s not necessarily the case.

So now it’s memorialized, or more accurately, in a place where we can all find it for next time! 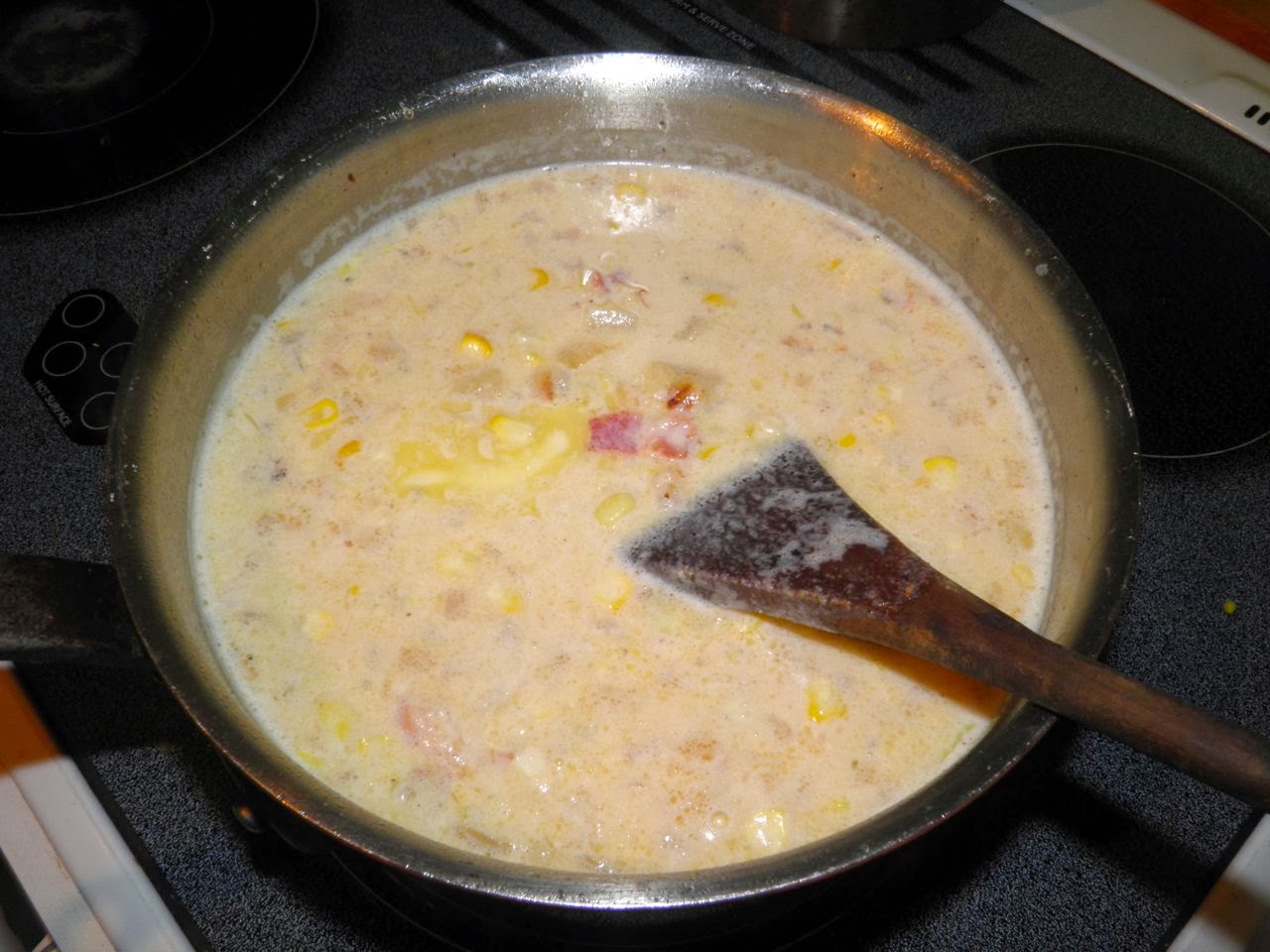 Slice the bacon into 1/2 wide pieces. Fry in a stock pot until slightly brown and the fat has rendered out. Remove the bacon to a dish, leaving behind about 1 tbsp of the fat.

Chop the onion and sauté in the bacon fat until slightly browned.

Peel and dice the potatoes into 1/2" cubes and add to the pot. Then add water to about 1" above the level of the potatoes. Season with salt and pepper and cook for 10-12 minutes, or until the potatoes are pierced easily with a fork.

Remove the kernels from the corn by slicing down the sides of the cobs with a sharp knife. This is best done in a cookie sheet to catch the Kernels. Add them to the pot. Then add the bacon back in.

Add both cans of evaporated milk and the pepper and bring the chowder to a simmer. Let the corn simmer for about 4-5 minutes. Stir in the butter. Taste for salt and pepper and adjust.

Serve with white bread or rolls to dip in the chowder liquid as you eat.