The first fall of snow is not only an event, it is a magical event. You go to bed in one kind of a world and wake up in another quite different, and if this is not enchantment then where is it to be found? – J. B. Priestley

We received our first real snow here in the country last night. Two inches of white, fluffy solitude. There’s a feeling that arrived with it I haven’t experienced for a very long time. I have nowhere I need to go so can enjoy it for its beauty, like a child. That’s one of the benefits of working from home. 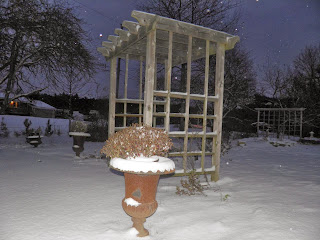 I was listening to our national broadcaster, CBC, this morning and my ears perked up when I heard the word “lobster.” I had almost forgotten that lobster season is to start today in the waters off Nova Scotia.

They were interviewing someone about pricing and today's delayed start of the season in the Atlantic from Halifax to Digby in the Bay of Fundy. That’s a big area.

It's due to the weather. It’s a bit too dangerous to allow men and their small boats out to set traps. Our Department of Fisheries and Oceans will make another call about safety on Wednesday. The season lasts for six months.

The interview reminded me it’s been a while since I had of one of my most favourite of foods –  and how crazy the pricing can be leading up to Christmas. But if you think lobster is too rich for your wallet, read on.

The price is vastly different between wharf and processors. It can be almost as much as three times more at our esteemed grocery chains than what our fishers are being paid. It is always a complaint and friction between the two.

So the secret is to know someone with connections who can get them “off the boat.” In the city, you can find fishers selling in mall parking lots for less than in the grocery chains. Support your local fishers if you can. It costs a lot to run and maintain a boat, gear and crew. They don’t have debit machines. Carry money. 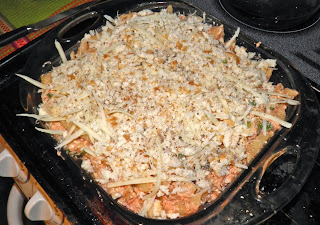 There’s a thousand ways to cook lobster, the most common ones at home being freshly shelled with butter, or in a chowder.

But they’re certainly not the only two that are easy to pull off at home. This recipe is a little unusual, being a baked pasta dish. It doesn’t have a “sauce” per se, but you'll never miss it.

The stated time does not include boiling and cleaning a lobster, but I would recommend it. It’s so much better than canned meat or even a pre-cooked lobster from the store. A 1.5 lb lobster will take 15-18 minutes in well salted water. Since this is baked, go for the lower time.

This would make an excellent buffet dish – just in case you’re attending one or two over the next four weeks – and no one’s allergic to shellfish. Anaphylactic shock is a real concern.

This recipe is really easy. It makes a decent sized pan, too, at 8x8x3. Certainly enough for 4-6 for a main meal. 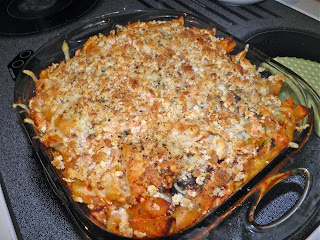 Grease an 8x8x3 baking dish with butter. Cook the penne and drain. Preheat the oven to 400°F.

Clean the lobster and cut the meat into bite-sized pieces. Grate the slice of bread into crumbs.

Add the drained penne and half of the cheese. Mix well and then stir in the lobster.

Pour the mixture into the prepared pan. Sprinkle the remaining cheese on top and then the grated bread.

Add more pepper if desired and bake for 35 minutes, or until bubbly and golden.

Feel free to comment. They’re always appreciated. I’ll answer quickly, and as best as I can. If you like this post, feel free to share it. All I ask is if you repost, please give me credit and a link back to this site.
Posted by Docaitta at 7:22 AM