Dining in Halifax drove me to Anchovies

Just sit right back, And you'll hear a tale, A tale of a fateful trip, That started from this tropic port, Aboard this tiny ship. (if you’re of a certain age you know what that is.)

Or, as I like to call it, "the reason you take your chances when boarding the ferry in Dartmouth to dine out in Halifax."

When I visit my spouse at college we try to pack as much activity and enjoyment into 2 days as possible. We’re kind of “dating” again, which is really nice. Of course an important part of the whole process is eating.

One restaurant that we thoroughly enjoyed was Bistro Le Coq, a French restaurant on Argyle Street. Loved, loved, loved it. We had exceptionally good luck dining for the month of September, except for this weekend. It was an unmitigated disaster.

It all started on Friday night when three of us went out to eat. You know the phrase: “you can never go home again.” Well, you can never go back to your favourite bar again, either. I’m talking the Economy Shoe Shop. You used to be able to set the Town Clock by our arrival.

I always loved their nachos, and Marty always knew when to come by to see if you were “ready for another.” You used to get good food and friendly service there. We received neither. If I could have left a negative tip I would have. 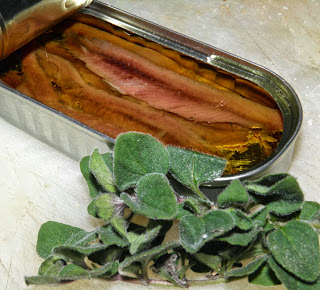 The food, significantly more than sub-par, was expensive for what you received (not like before) and our waiter spoke so fast you could hardly understand what he was saying. The food was so bad that we ended up going to The Old Triangle for something else to eat to get the taste out of our mouths.

Let me elucidate. The nachos were a mess – undercooked, cheap tasting cheese, too few actual chips, served with salsa that probably was from a jar. Enough said there. Easy to understand.

We also had the Build-a-Board Antipasti. It starts at $3. It is “an assortment of artisan breads, house made chutneys and pickled onions.” You can add fresh fruit, olives and sun-dried tomatoes for $6. Additionally you can add cheese, cured meat and smoked salmon for $8 more.

We shot the works for $17. What did we get?The "assortment of artisan breads" was slices of dried, round bread. No “assortment,” unless they meant "more than one piece"...

The house-made chutneys consisted of blueberry and peach. You could tell blueberry season just ended. There was three times as much of it as the peach. The peaches had to have come from a can. A cheap can. Both chutneys were overbearingly cinnamon-y. At the time I said that they tasted like the inside of Cricket on the Hearth smells – Christmassy. And not in a good way.

The $6 addition consisted of 7-8 olives, around a dozen blueberries (a small assortment plate where the same ingredient is used twice?!?), four wafers of pear and 3 sun-dried tomato halves.

But it gets better. For $8 extra, you get 3 small triangles of herbed havarti, two rolls of some sort of packaged sliced Italian meat and two pieces of smoked salmon.

Seriously? Not a good experience and one I will never repeat.

Saturday night wasn’t any better. A couple weeks before we tried to dine at The Bicycle Thief, a trendy restaurant on the waterfront, but couldn’t because they were too busy. That's a good sign, so we tried again.

I can’t comment on the food, or wine, because we received neither. We were seated at the bar, which usually isn’t too awful an experience. But their bar was cramped – four chairs in a 5 foot space. We received menus and a wine list. But then we were completely forgotten.

We waited a full 15 minutes and no one even so much as came by to ask us if we would like something to drink. The busy bar staff assiduously avoided eye contact with all of us sitting at the bar.

That’s a real shame, because I had my eye on a $90 bottle of wine. We could have dropped $200 on dinner easily. I was hungry.

But after 15 minutes we picked up our coats and left. I don’t even think anyone said “thank you” or “see you again” when we exited. We could have been there eating for hours for all they knew...

But since we were exceptionally hungry we decided to order. Our server informed us they had very little red wine (in contrast to several on the wine list). So we opted for a Portuguese beer. There were two on the menu. They had neither.

Saturday night, in September – cruise ship time, and you have hardly any wine and no signature beer? I bet if we had ordered the Feijoada - their "Brazil's national Dish" (served only on weekends) they wouldn’t have had that either. So we showed our displeasure with the soles of our shoes.

By this time we were pretty weary of poor service in Halifax’s finest dining establishments, but we made it to one last place: Baton Rouge.

As you can imagine our annoyance and disgust was almost palpable. We escorted to a (dirty) table, and when we asked for a clean one our second option was dirty as well. But by this time we weren’t even in the mood to eat. So we went back across via the ferry without so much as a crust of bread to show for our effort.

Saturday night left a metaphorical bad taste in our mouths, and Friday night a literal one.

The moral of this fateful trip? I have no idea, but writing about it certainly was cathartic. I guess, if anything, be careful of where you choose to dine in Halifax if you like your food “good” or “in a reasonable amount of time.”

And if the entire population of Halifax thinks somewhere is good, then it’s probably not. It’s just trendy. This I know from past, as well as this weekend’s, experience.

So I’m in the mood for some real food, and for me that's anchovies. Lots of anchovies. I’m going to fry me a sandwich.

This recipe is actually an Italian classic. It will be the first decent food I’ve had since Thursday. 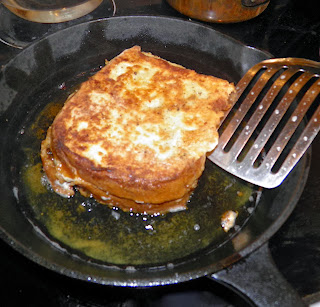 Place the mozzarella on the face of one slice of bread. Lay as many anchovy filets as you wish on top of the cheese. Then add the oregano and some black pepper. Close the sandwich up.

Heat a good amount of olive oil (1/4” deep) in a small skillet until it is fragrant. Reduce the heat to medium.

Take two plates. Mix the milk and egg together on one; the flour, salt and pepper on another. Dip the sandwich in the egg mixture, letting it soak a little and coating both sides well. Then dredge in the flour.

Place the sandwich in the hot oil and let it cook until the cheese has softened and the bread is deliciously crunchy and brown on both sides.

Remove from the heat, hide in a corner, snarl and devour it.

Questions? Comments? Derogatory remarks? Just ask! I’ll answer quickly and as best as I can. If you like this post feel free to share it. If you repost, please give me credit and a link back to this site.
Posted by Docaitta at 5:47 AM